It is safe to say that for the past century a certain brand of silk thread has become synonymous with the tying of traditional north country spiders. I am of course referring to Pearsall’s Gossamer which after two centuries of production, ceased to exist when the company ended the manufacture of its various embroidery silks in 2012. A decision which had the knock-on effect of sending flytyers all over the world into a tailspin, with the last remaining spools being highly sort after by flytyers seeking to dress their north country spider patterns with the supposedly correct colour shades.

However, as with all things related to flytying, things don’t appear to be what they at first seem.

The concept of Pearsall’s silk being the traditional silk to dress north country spider patterns is exaggerated, to say the least. A cursory browse through the pages of the early north country publications shows no mention of this silk brand, let alone any identification of specific numeric colour shades in relation to fly patterns. The early works of such north country authors as Kirkbride, Jackson and Theakston, and even onwards to the seminal publications of Pritt, shows that they were less than circumspect about the silk threads they used. Even the fly patterns contained within locally held fly lists from which these great publications arise show no mention of the Pearsall’s name. And the preference for precise colour shades simply did not exist, no doubt due the traditional technique of waxing the threads, which had the knock-on effect of subtly altering the silk’s colour.

Let the body be made of hare’s ear, mixed with dusky olive mohair: it must be ribbed with gold-coloured silk, and a fine mottled hackle from the back of the partridge, near the shoulders, must be wrapt round hook – hook, No.7 or 8.

Made by wrapping a Pewet’s topping, or Tom Tit’s (Wren’s) tail feather, on a body of orange and lead-coloured silk, snipping part of the fibre off again.

Legged and winged with a feather from outside of a woodcock’s wing; and orange silk for body; and a few fibres of mohair of squirrel’s fur, for legs.

It is a simple fact that regarding north country spider patterns, the local flytyers used whatever appropriate material they could find. Locally thriving silk and textile mills, like the fields from which they sourced their hackles, provided ample room to garner supplies for the experimentation of tying trout flies without the need to obtain materials from distant counties. From early times Jaggermen crisscrossed the northern dales bringing goods to remote communities including silk, cotton and a host of other exotic items, all no doubt finding their way into various fly patterns of one sort or another. However, it would be foolish to think that these salesmen only carried Pearsall’s silks and no others.
So, where does this modern fetish for Pearsall’s Gossamer silk come from? Well even by north country standards; it is a relatively circuitous journey.
In 1836 the seminal publication The Fly Fisher’s Entomology by Alfred Ronalds hit the printing press and became a hugely influential book amongst anglers of the Victorian period. And in Chapter 5 of his book, Ronalds gives us one of the first mentions of the Pearsall’s silk brand in relation to fly dressing.

“Now for the silk; ’tis “fine glovers’ silk,” the best you can use for all purposes of whipping flies, &c. &c. Give me fawn or straw colour. The next best sort is white “wig-makers’,” — very fine and strong, but more harsh, and not so easily waxed. I buy all that I use at Pearsall’s, in Cheapside, the general resort for fishermen and “Amateurs,” and professional” fly or tackle-makers.”

Given his influence amongst a generation of Victorian anglers the cult of “Pearsall’s” could easily have started with Ronalds’ publication. However, the business of flyfishing and flytying is no different to other sports or businesses. And for certain brands to gain traction, advertisement in the leading publications of the day needs to take place, and distribution links formed. Something which Pearsall’s were aware of, with their close links to Farlows & Co, and adverts for eighteen shades “Gossamer” fly tying silks being regularly placed in the Fishing Gazette of the 1880s. However, given Pearsall’s vast catalogue of available silk shades, why only offer eighteen to a nation of flytyers? Well, the answer could well be found in Pearsall’s close links to Farlow’s & Co. And it is interesting to speculate that Farlow’s may have had a hand in formulating the precise number and shades of silk offered to flytyers.

By the late 1880s, Pearsall’s place within the flytying consciousness seems to have been firmly cemented with Frederick Halford’s endorsement of their silks in the fourth chapter of his Floating Flies and How To Dress Them published in 1886. With a further enhancement coming with H.G. McClelland’s endorsement in his 1898 publication The Trout Fly Dresser’s Cabinet of Devices or How To Tie Flies For Trout and Grayling Fishing.

“The first material we shall require is tying silk, and Pearsall’s “gossamer” tying silk, which is now widely known and used, is the best with which I am acquainted. It is sold in a very convenient form, viz., on box-wood reels of small height and relatively large diameter. The silk itself is very fine, smooth, hard and strong, in fact just as it ought to be.”

However, it is not until 1916 with Edmonds & Lee’s publication Brook and River Trouting that we find the first real tangible mention of Pearsall’s silk in relation to dressing the north country spider patterns. In their striving to create a modern approach to the dressing and fishing of largely traditional north country patterns, the two authors built upon earlier publications but with the inclusion of a more systematic approach to the dressing of the flies, based around available shades of Pearsall’s silk. And it is from the two authors statement of using various silk shade numbers, and the inclusion of a Pearsall’s silk shade card within their publication, that the modern connection between the north country spider and Pearsall’s Gossamer Silk comes.

Later, a succession of modern-day authors and flytyers would take Edmonds and Lee’s preference and indelibly place Pearsall’s Gossamer silk at the heart of north country flytying practice, through a failure to research earlier publications and fly lists. Coupled with a lack of knowledge regarding both historical and modern alternative flytying silks. However, a cursory glance at earlier literature and angling publications show that other silk brands were available and used in flytying, with a tantalizing clue coming in the form of Skues’ article under the synonym of Val Colson on Aldham’s A Quaint Treatise on Flees, in the Fishing Gazette of Jan 28th 1899. And later replied to by George Davenport.

“It was illustrated by means of sunk panels, in which were mounted, side by side, the artificial flies described, and specimens of the material employed in their manufacture. It was published at £4 4s., and was, and is, of great interest, not only on account of the text, but on account of the exquisite colours of the floss and tying silks employed by Mr Aldam in the work of fly dressing. It is a pity that Messrs. Pearsall or some energetic trade rival do not procure and imitate the colours.” Val Colson.

“Dear Sir. – In last week’s publication of the Fishing Gazette, where “Val Colson” has under review the past works on angling, he alludes to a very valuable book, published by the late Mr W.H. Aldam in 1876. It was a very large and elaborate work, the price being four guineas. One feature of the book was the standard makes of the best-known killing flies – these flies lying in small sunken recesses in cardboard.
“Val Colson” deplores the fact that Pearsalls and others do not produce to-day these beautiful imitations of colours. We, however, beg to mention that Mr Aldam was a life-long friend of our late Mr Geo. Davenport, who supplied Mr Aldam with all the silk he required for dressing flies, Mr Davenport himself being an expert angler and fly dresser for upwards of half a century. These excellent silks we are supplying to-day, and whether for fineness, strength, or colour cannot be excelled.”
Yours truly
George Davenport and Co
Hope Silk Mills,
Leek.

And as if to emphasize their reputation as manufacturers of fly tying silks. George Davenport and Co would later exhibit their range of fly tying silks alongside Charles Farlow & Co at the British and Irish Silk Industry Section of the Women’s International Exhibition of 1900.

Closer to home companies such as Bell Busk and Lister’s also produced some of the finest embroidery silks available, all of which were used by local flytyers from time to time. Local tackle shops such as J.E.M. Miller, Maskell Mitchell’s and Francis Walbran also sold their own brands of tying silks all of which were bulk purchased and re-branded from their own individual suppliers, one of which being  Lister’s Manningham Mills of Bradford who supplied J.E.M. Miller with his range of tying silks. 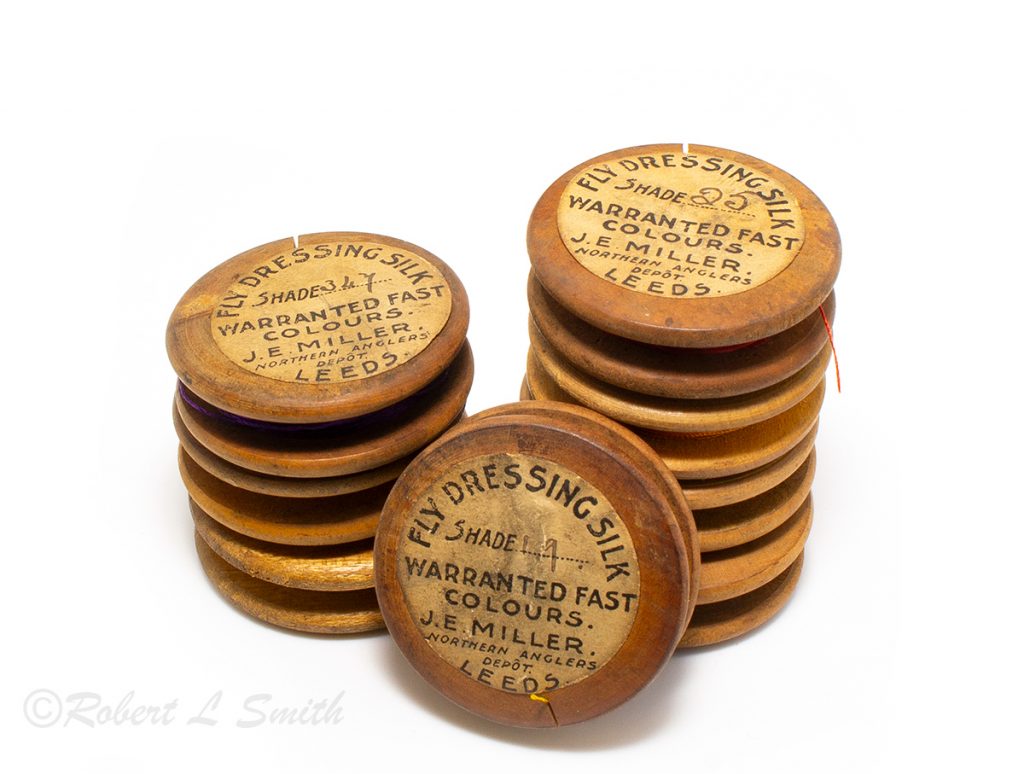 So, with a little digging, numerous other brands of tying silks emerge, all of which may have been used at one time or another in the tying of north country patterns. And that the often-quoted traditional pre-requisite for the use of Pearsall’s Gossamer silk regarding the dressing of north country spider patterns, much like a waxed thread, holds no water!